Why Copenhagen? A director’s note

“Decisions make themselves when you’re coming downhill at seventy kilometers an hour. Suddenly there’s the edge of nothingness in front of you. Swerve left? Swerve right? Or think about it and die?” –Werner Heisenberg, Copenhagen, Act One

I first read Copenhagen in 2001, finding a copy in the new arrivals section of the library. The playscript has the kind of momentum that makes a person devour it in one sitting—which I did, at the kitchen table of my Silver Spring group house.

I also read it at a time when I happened to be particularly fascinated by mid-20th century history—World War II, the building of the atomic bomb, and the Cold War.

Michael Frayn’s Copenhagen is a dramatic exploration of a 1941 meeting between two Nobel prize–winning physicists: Niels Bohr, a Dane, and Werner Heisenberg, a German, who was also Bohr’s former colleague and protégé. In the years since, Bohr and Heisenberg never agreed on what exactly they said to each other at this fraught meeting in the midst of World War II. But one thing was certain—their relationship was never the same.

According to Heisenberg, he asked Bohr, “Does one, as a physicist, have the moral right to work on the practical exploitation of atomic energy?” In Copenhagen, the two scientists, along with Bohr’s wife, Margrethe, explore what his words may have meant—and how horrifyingly different the outcome of the war might have been had Bohr not abruptly ended their conversation. 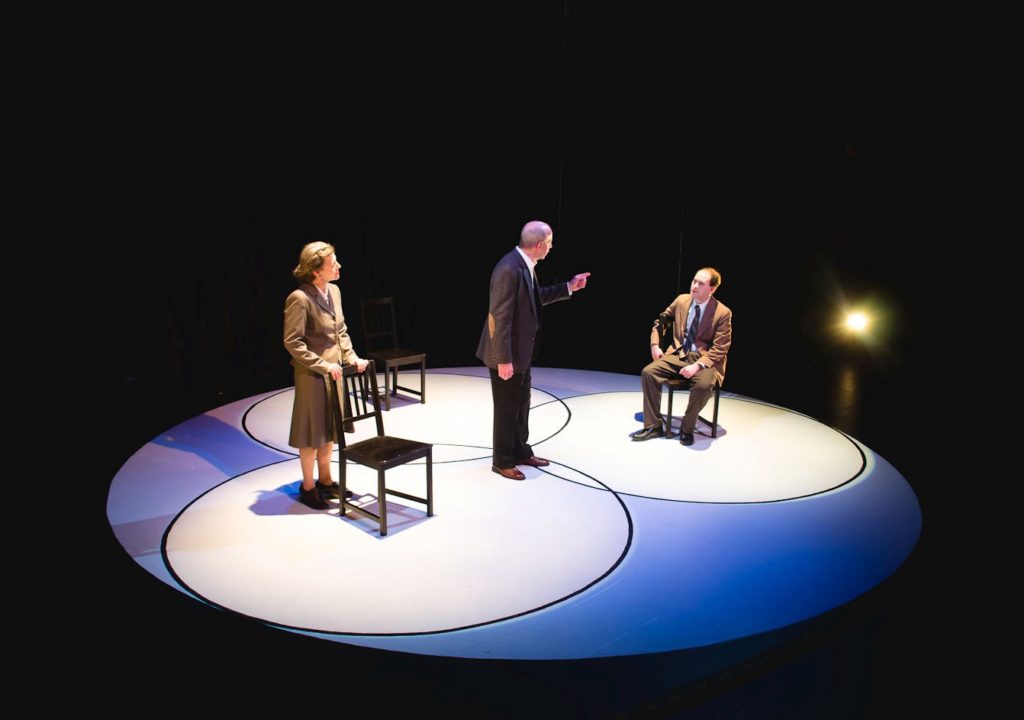 Frayn’s script draws analogies to human experience from physics concepts. Heisenberg’s uncertainty principle asserts that both the position and the momentum of a particle cannot simultaneously be known. Bohr’s concept of complementarity means that you can observe things as a wave or a particle, but not both at once.

So it is with people and the contradictory truths about them. As Bohr puts it, “We have to choose one way of seeing them or the other. But as soon as we do we can’t know everything about them.” Bohr and Heisenberg are father (figure) and son, mutual sounding boards; they are also enemies on opposite sides of the war. Margrethe is a gracious hostess who supports and balances her husband; she also fiercely challenges the two men. The relationships form and reform, observable as one thing one moment, and another thing the next.

When one learns about an event from history, it is in a sense happening again at that moment. “The past becomes the present inside your head,” as Margrethe says. The creation of the atomic bomb, for one learning about it for the first time, unfolds not just as a story, but also as an event, with urgency and suspense. A good play or a good book that includes details we’ve never seen before can bring that same feeling of newness even to what we think we already know about history.

The 2013 production of Copenhagen: John Decker and Benjamin McRae. Photo by Caitlin Dennis.

For Perisphere Theater, with a mission that includes encouraging in people of all ages a love of history, this play was a natural choice for our inaugural season. It’s a remount of a production I directed in Rockville in 2013—I always felt I wasn’t “done” with this play. And Copenhagen represents much of what I hope to achieve over the coming years with Perisphere Theater: the best-written and most emotionally affecting plays, the ones that remind us where we’ve come from.

History is never finished; it is always in flux, always being interpreted anew. We are forever evaluating and guessing at the motivations and secret struggles of those who came before us. The massive success of a work like Lin-Manuel Miranda’s Hamilton, for example, shows how exciting history can be when a talented artist tells it. May we never be done painting new pictures of the past.