Founding Perisphere Theater in 2014 and running the company over the past few years has been an exciting adventure. Starting my own theater company has long been a dream of mine, and I was continually touched by the support of friends in making it a success, amazed by the high level of talent I was privileged to work with, and grateful at the way an idea and a mission became a concrete reality.

The time has now come for me to hand the reins over to a new leader. Kevin O’Connell will assume the artistic directorship of Perisphere Theater. Kevin is a longtime friend and colleague who was one of the founding supporters of Perisphere, and I am confident he will be the perfect person to lead the next stage of the company’s journey. 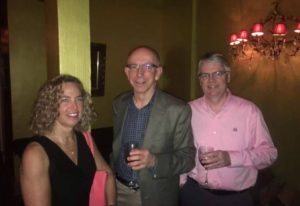 In addition to being the founding artistic director of Barabbas Theatre Company, Kevin is a local director, dramaturg, and historian whose experience and dedication align with Perisphere’s artistic mission and its future in production. Read his full bio.

The company will continue in Montgomery County, Maryland, rather than in Washington, D.C., and I hope all the artists, audience members, and supporters of Perisphere will continue to participate in its journey under Kevin’s leadership.

Thank you all for making the early years of Perisphere such a wonderful adventure and learning experience.

“Faced with a fate so hideous and absurd, Can you not utter one dissenting word?” —Dorine, II.iii For our inaugural season, Perisphere Theater offered two relatively contemporary plays, with very small casts. This year, we Read more…