Controversy over the mysterious Copenhagen meeting 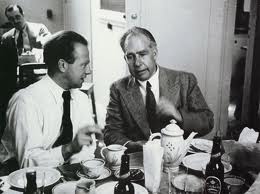 The historical and scientific implications of the play Copenhagen have been debated. Many historians have weighed in since the production first opened on how they view the accuracy of the characters’ statements and the motivations that Frayn has given them (both researched and imagined). Frayn himself issued a postscript after the London production, addressing some scientific and historical points, as well as a post-postscript after the New York production.

Did Heisenberg keep the German nuclear program from achieving an atomic bomb, either subconsciously or consciously? Was this his form of resistance, or was it a spin he came up with after the war to improve his image? How could Heisenberg stay in Germany when so many of his colleagues were forced to flee? If he had made different choices, at any number of points along the way, how might history have been different?

Ultimately, the play is a work of art bringing to life historic figures whom we can no longer ask for their thoughts, even if they could collect them. As the historical record suggests, being able to remember even what they said to one another on this one occasion was an insurmountable challenge. The struggle of two old friends to stay friends amid the most extreme circumstances makes for a poignant theatrical journey.

Join us for a discussion of the historical and ethical implications of the Copenhagen meeting after our Dec. 4 matinee, led by Georgetown University professor and historian of science Kathryn Olesko.